The Hawaii Chapter SPJ is sponsoring a live television debate between Gov. Linda Lingle and her Democratic challenger Randy Iwase from 7 to 8 p.m. Oct. 6.

It will be broadcast live on KITV-4, KHON-TV and KHNL-TV. KGMB-TV will broadcast it later. The debate will take place in KITV's studio.

Gerald Kato, head of the University of Hawaii journalism department, will be the moderator.

The chapter thanks Lynette Lo Tom and Wally Zimmermann of Bright Light Marketing for helping to make this possible. Lynette, long active in Hawaii Chapter SPJ, donated the time of veteran TV newsman Zimmermann, who is producing the debate.

Many thanks to Emily Viglielmo, Craig DeSilva, Dave and Leonor Briscoe, Vicki Viotti and Stirling Morita for volunteering in the PBS pledge drive. 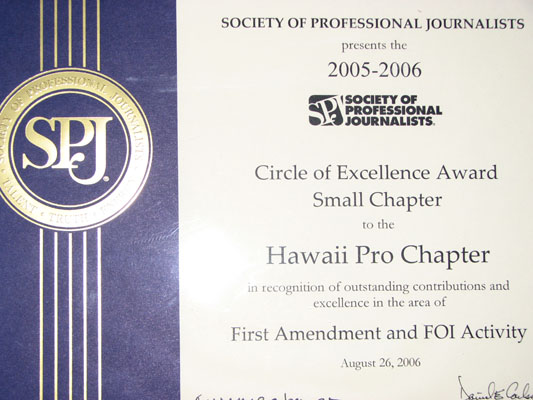 INDIANAPOLIS – The Society of Professional Journalists, the nation’s most broad based journalism advocacy organization, is pleased to honor the Hawaii Pro chapter with a Circle of Excellence Award. The chapter is one of 10 recipients of the prestigious awards.

Annually, SPJ recognizes chapters for outstanding work during the preceding year in five areas: First Amendment and Freedom of Information activity; campus relations and scholarship activities; activities promoting diversity among journalists; professional development and continuing-education programs; and chapter communications. Awards are given for each category to one large (75 or more members) and one small (fewer than 75 members) professional chapter.

"These awards represent tireless hours of journalism advocacy, which is desperately needed right now," said Christine Tatum, SPJ’s president-elect. "We honor these chapters because they work incredibly hard to deliver top-notch professional training to journalists nationwide and to help the general public better understand the importance of how a free and fair press is vital to democracy."

Founded in 1909 as Sigma Delta Chi, SPJ promotes the free flow of information vital to a well informed citizenry; works to inspire and educate the next generation of journalists; and protects First Amendment guarantees of freedom of speech and press.

Many thanks to the judges of the Region X (Pacific Northwest) and Ohio contests:

Pacific and Asian Affairs Council and Society of Professional Journalists

cordially invite you to a luncheon seminar on

Building Understanding between the

(Please pay at guard kiosk on East-West Road and display flyer on dashboard.)

observations and analyses as part of their participation in the Senior Journalists Seminar, an EWC

travel, study, and dialogue program. This program offers an opportunity for senior reporters,

columnists, and producers to engage their peers on issues that have hurt relations between these

Asian countries and the U.S., especially since 9/11.

by June 19, 2006. For information, please call 944-7111 or email ewcinfo@eastwestcenter.org. If you would like to receive email